Dropsets have played an important role in shaping some of the best physiques of all time. Maybe you’ve seen The Rock tossing the chains off his neck one at a time as he’s doing dips. If you’ve been around a while, you’ve maybe seen Arnold Schwarzenegger “running the rack,” or Larry Scott’s infamous power drop he learned from the immortal Steve Reeves.

If you’re new to dropsets, now’s the time to add them to your tool set. They’re easy to learn, easy to fit into your workout, and don’t require elaborate equipment. They do, however, require an elaborate amount of effort to benefit from what might be the most effective hypertrophy technique of all time.

A dropset is defined as continuing an exercise at a lower weight once you’ve reached muscle failure at a higher weight. For the sake of convenience, dropsets are often performed on machines, since reducing the weight requires nothing more than moving a pin. Dropsets can also be performed with dumbbells, barbells and, conceivably, many other forms of strength training, from sandbags to Atlas stones.

Dropsets are part of the famous Weider System that Joe Weider developed in the 1980s, but their origin dates back even further. Henry Atkins, editor of Body Culture magazine, created the technique in 1947, calling it the “multi-poundage system.” Since then, this ornery approach has gone by a lot of names, including descending sets, strip sets, the stripping method, triple-drops, down the rack, and running the rack.

How Do I Perform A Dropset?

On A Cable Machine

If your workout calls for 5 sets of 10 reps of close-grip front lat pull-downs on a cable machine, here’s how you can turn that into a dropset workout.

Start at a certain weight, say 160 pounds. Instead of stopping at 10 reps, keep going to failure. Stop long enough to move the pin up to a weight that’s 10-20-percent less than your starting weight. In this example, you’d move to about 130 pounds.

On a cable machine

Rep to failure at 130 pounds, then move the pin to the next 10-20-percent lighter weight (about 100 pounds) and do reps at that weight until you reach failure. Continue this process until you’ve done 5 sets total, at which point you and your arms will be done.

If you’re using dumbbells, an example of using dropsets would be “running the rack.”

Barbell dropsets are usually associated with the strip set. In this technique, you load small plates on the barbell and, once you reach muscular failure at each weight, you—or better yet, your partner—strips off the plates one by one.

An example would be doing biceps curls with 105 pounds, which would be a 45-pound bar with three 10s on each side; curl this weight until failure. Then, your partner immediately strips a 10-pound plate off each side, and you do 85 pounds until you reach muscle failure. Repeat the process. You could continue this all the way down to the 45-pound Olympic bar.

Generally, you want to reduce the weight or intensity 10-30 percent per drop, and do anywhere from 2-5 drops with one exercise. Your rest period is usually only as long as it takes you to change the weights.

Why Should I Do Dropsets? 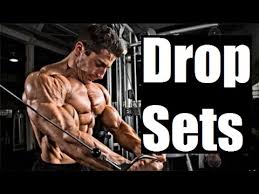 The purpose of dropsetting is to “shock” your muscles by placing more stress on them for a longer period of time than you do in a traditional set. More shock results in more muscle hypertrophy.

The overall volume of blood that moves to the muscle group being trained in dropsets is so large that you’ll experience an amazing pump as you fill the target muscles with oxygenated, protein-enriched blood, setting the stage for peak muscle hypertrophy.

How Do I Work Dropsets Into My Routine?

Some bodybuilders do six or more exercises in a single session, performing a dropset for each. If you’re just starting to use dropsets, I recommend using them with just one exercise per muscle group for each training session.

Dropsets bring about increased time under tension, and you take each set to failure, making this a very demanding technique. Start conservatively, then slowly increase the number of dropsets you do per workout—but do start working them into your program. If you don’t, the only thing you’re dropping is the ball.

But all of this is just advise.

You can do whatever the F**K you wanna do!

Your Friend and Coach,