I never grow tired of having this conversation, and yet, I’m consistently surprised at how frequently it comes up. Equally shocking is how wide-ranging the conflicting opinions are, and with what stern conviction everyone seems to stand, whichever side of the proverbial fence they’re on. I have no doubt that even you, dear reader, feel strongly one way or the other about this issue.

“Can you earn jacked legs without weights?”

As you might expect, I argue that yes, you certainly can. But the answer isn’t as simple as a single word implies. Let me lay out a few caveats, then show you the best moves for building steel wheels without touching the iron.

Now, before anybody flies off the handle here, let me be perfectly clear about a few things:

You still have to work. No one will get jacked—or big, strong, ripped, buff, whatever—if they are not willing to train intensely, consistently, and often. There are no “hidden secrets” or magic moves. The exercises contained within this article aren’t “hacks.” Quite the opposite—they’re tools to help you work harder and more effectively. No matter if you choose to push iron or train with just your body, you won’t get results without exerting the effort.

Diet is important for muscular growth. If you want to put on mass, it is important to consume a surplus of complete proteins, drink plenty of water, and receive your vitamins and minerals. You’ll also want to get plenty of fiber, so eat those veggies! In fact, it’s a good idea to build around protein and fiber with every single meal.

You must rest up. You don’t get big in the gym. You do it when you recover. So for muscular growth, make sure you get a good night’s sleep. Although exactly how much sleep you need varies from individual to individual, I recommend trying to get an average of at least seven hours a night, especially when training hard.

Take your time. I believe consistency is probably more important than intensity. Don’t expect results without continued effort over time. Any changes we make within ourselves, whether physical, mental, or emotional are based upon our day-to-day habits, not occasional occurrences. If you want to make changes, then make these exercises a part of your life.

Got all that? OK, then let’s train.

The following exercises do not incorporate any external weights or machines. Instead, they manipulate leverage, exploit weight-per-limb distribution, and employ asymmetry in order to overload muscle groups. Try adding them to your program and see what your lower body can resist, without using any external resistance at all!

Difficulty Level: 6
Rep Range: 5 sets of 10 reps per leg
Bulgarian Split Squat
The Bulgarian split squat is a perfect example of how switching your body’s position can place a greater emphasis on a particular limb.

To perform a Bulgarian split squat, stand with your back toward a bench of approximately knee height. Lift a foot and place it on the bench behind you. By elevating the rear foot, your front foot is forced to bear more weight. Now, lower yourself down until your front knee bends to approximately 90 degrees, while keeping your back straight. Your rear knee will be bent to a more acute angle than the front. Return to the top position to complete your rep. Train both sides evenly.

The intensity of this exercise can be almost infinitely scaled, simply by changing the height that the rear foot is elevated. The higher up the rear foot is, the more weight goes into the front foot.

Difficulty Level: 7
Rep Range: 3 sets of 10 reps per leg
Single-Leg Straight Bridge
In training the lower body, it is essential to target your rear muscular chain, particularly the hamstrings, glutes, and lower spine erectors. A common rookie mistake is to neglect these posterior muscles, while focusing solely on the ones that you can see in the mirror, such as the quadriceps. Bridging is excellent for balancing the body out from back to front. The single-leg straight bridge is particularly effective, as it works the legs unilaterally by placing the emphasis on only one limb at a time.

Begin by sitting with your legs straight in front of you and your hands on the ground by your hips. Raise one leg in the air, then drive your hips up. Straighten out your body by pressing down with your hands and the grounded heel. Drop your head back, push your chest out, and look behind you. Pause briefly in the top position, then lower back to the bottom with control to complete the rep. This exercise is harder than it looks, so take it slow and be certain to work both sides. 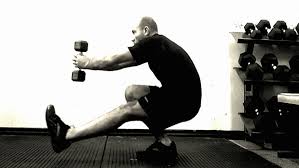 Difficulty Level: 8
Rep Range: 5 sets of 5 reps per leg
Single-Leg Squat
Even those among us who can barbell back squat twice our body weight often receive a lesson in humility when attempting to perform a squat on just one leg. Not only is the load greater—as are the yields—but there is also a neurological component to the single-leg squat that puts it in a category all its own.

To perform a single-leg squat, stand on a low bench with one leg, allowing the opposite leg to hang off the side. By standing on a bench, those of us who lack extensive hamstring mobility can still reap the benefits of the increased bodyweight load associated with this exercise. This is because standing on the bench allows you to let your non-squatting leg drop below surface level.

Now, reach your arms forward and squat with your standing leg until your hamstrings make contact with your calf, allowing your non-squatting leg to descend down and in front of you. Pause briefly at the bottom before standing back up to the top position. Complete your set in its entirety and then repeat on the opposite leg.

The skater squat is a single-leg squat variant where the non-squatting leg is placed behind the practitioner rather than in front. This change in position greatly affects the movement pattern, making it mechanically almost like a bodyweight leg press, while also adding a unique challenge in terms of leverage and balance.

To perform a skater squat, stand on one foot with your opposite leg hovering behind you and bent at the knee. Reach your arms out, lean forward, and squat with your standing leg, lowering your opposite knee toward the ground behind you. Pause briefly with your knee approximately one inch from the ground, then return to the top position to complete your rep.

Take care to descend slowly in order to avoid any potential impact on your rear knee, and be sure to train both legs evenly.

Use The Tools You Were Born With

In the world of training, there are many paths one can take. When you train with just your body, the only limitations are the ones you impose on yourself. Give these exercises a try and let me know what you think in the comments. Your experiences may surprise you. Keep the dream alive!

But all of this is just advise.

You can do whatever the f**k you wanna do 🙂

Your Friend and coach